Afghans flee to Lashkar Gah, Helmand’s provincial capital, during fighting between Taliban and Afghan security forces on Monday. Local authorities estimate that some 35,000 people have been displaced into Lashkar Gah since a Taliban offensive began in Helmand. 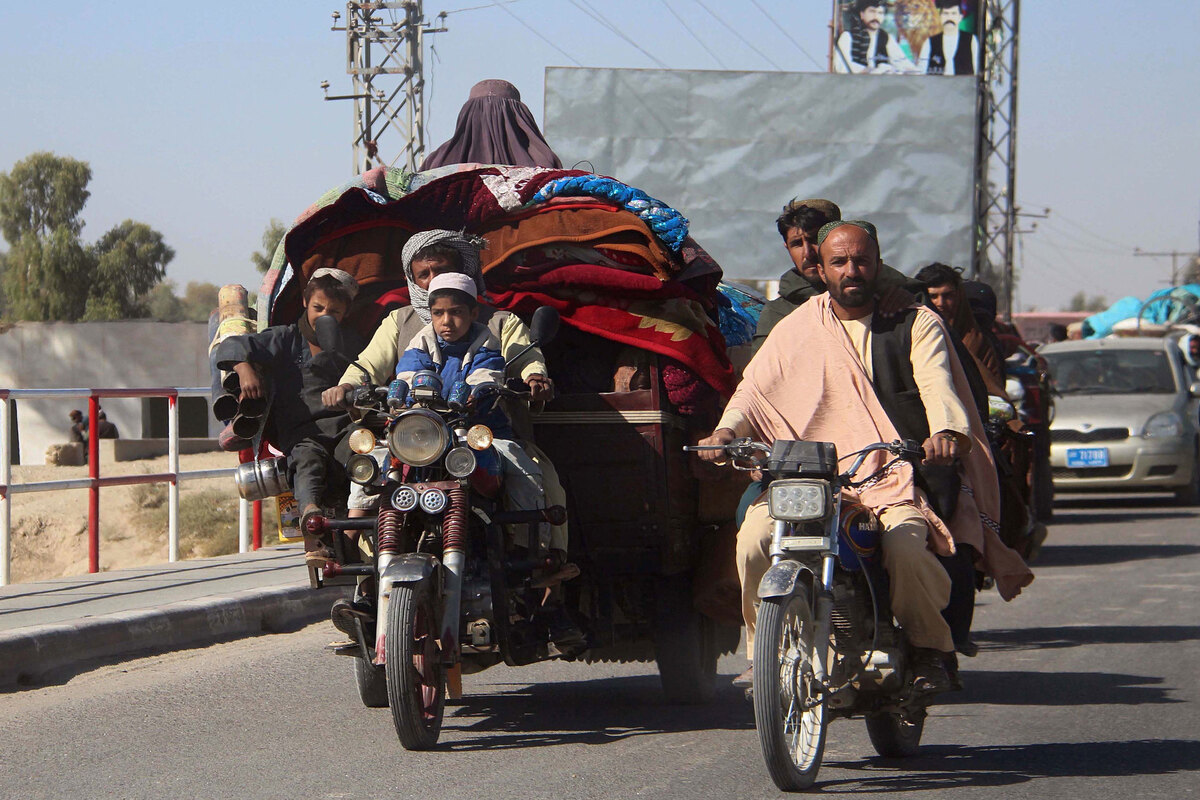 Afghans flee to Lashkar Gah, Helmand’s provincial capital, during fighting between Taliban and Afghan security forces on Monday. Local authorities estimate that some 35,000 people have been displaced into Lashkar Gah since a Taliban offensive began in Helmand.

As the Taliban launched an offensive over the weekend to take areas of Afghanistan’s southern Helmand province, there were hundreds of casualties amid some of the most intense urban fighting since Afghan peace talks began last month.

Among the victims was a pregnant woman struck by a stray bullet. She survived but her fetus died in utero, apparently the result of the bullet’s impact, Doctors Without Borders says.

The woman was among the Afghan civilians who appeared to have been caught in crossfire while fleeing villages near the provincial capital Lashkar Gah, says Karsten Noko, the humanitarian affairs officer for Doctors Without Borders.

The Taliban launched coordinated attacks in different parts of Helmand, says Omer Zwak, the provincial governor’s spokesperson. Local authorities estimate that some 35,000 people have been displaced in the fighting, which intensified around Lashkar Gah on Sunday.

There were so many casualties that the local 100-bed hospital was quickly overwhelmed, Noko says. A facility run by Doctors Without Borders absorbed some 20 more people needing treatment and care, including the woman hit by the stray bullet, who remains unconscious.

«She is still under our care and received surgery — we are waiting to see how the situation goes for her,» Noko says.

The woman’s personal tragedy resonated with Afghans on social media. Heartbroken and angry, some shared an unconfirmed image appearing to show an X-ray of a fetal skeleton with a projectile lodged near the spine.

A Taliban spokesman told Afghanistan’s TOLO news channel that the group was recapturing areas taken by government forces a few months ago.

«The Taliban need to immediately stop their offensive actions in Helmand Province and reduce their violence around the country. It is not consistent with the US-Taliban agreement and undermines the ongoing Afghan Peace Talks,» U.S. Forces-Afghanistan spokesman Col. Sonny Leggett said in a tweet on Monday, quoting Gen. Scott Miller, the U.S. forces commander.

The U.S. military conducted «several targeted strikes» in Helmand to defend Afghan security forces under Taliban attack, Leggett tweeted, noting this was «consistent with» the U.S.-Taliban agreement signed in February.

The insurgents had earlier curbed their attacks on urban centers, as part of that agreement. Their move to take Lashkar Gah and surrounding villages appears to have gone further as a brazen attempt to capture a government-held city.

Taliban fighters appeared to meet little initial resistance, TOLO reported. As they advanced, some Afghan police forces abandoned their checkpoints on the city’s outskirts, which the Helmand police chief described as a «tactical retreat.»

Local media reported that Taliban fighters also cut off the highway leading to the nearby city of Kandahar. Zwak says Afghan security forces are trying to take back areas the Taliban had captured.

«The increasing level of violence is certainly disheartening, and it increases the level of public pressure on us,» Nadery says. «They say: ‘How is it working? What does this mean when you are sitting and talking with a group that increases its violence and killing of Afghans?’ «

Attacks like the one on Lashkar Gah are putting the government in an increasingly untenable position, Nadery says.

«It can’t continue like this for long,» he warns, «because if the violence continues to this level or increases, the public pressure will make [peace talks] almost impossible to pursue.»

Khwaga Ghani contributed to this report from Kabul.