Tropical Storm Sally is edging closer to the Gulf Coast and is expected to strengthen into a hurricane before making landfall. This view of sunrise over the U.S. Monday morning also shows smoke from massive wildfires in the West.

Tropical Storm Sally is currently forecast to make landfall on the Gulf Coast as a hurricane, possibly in the area near Gulfport, Miss. 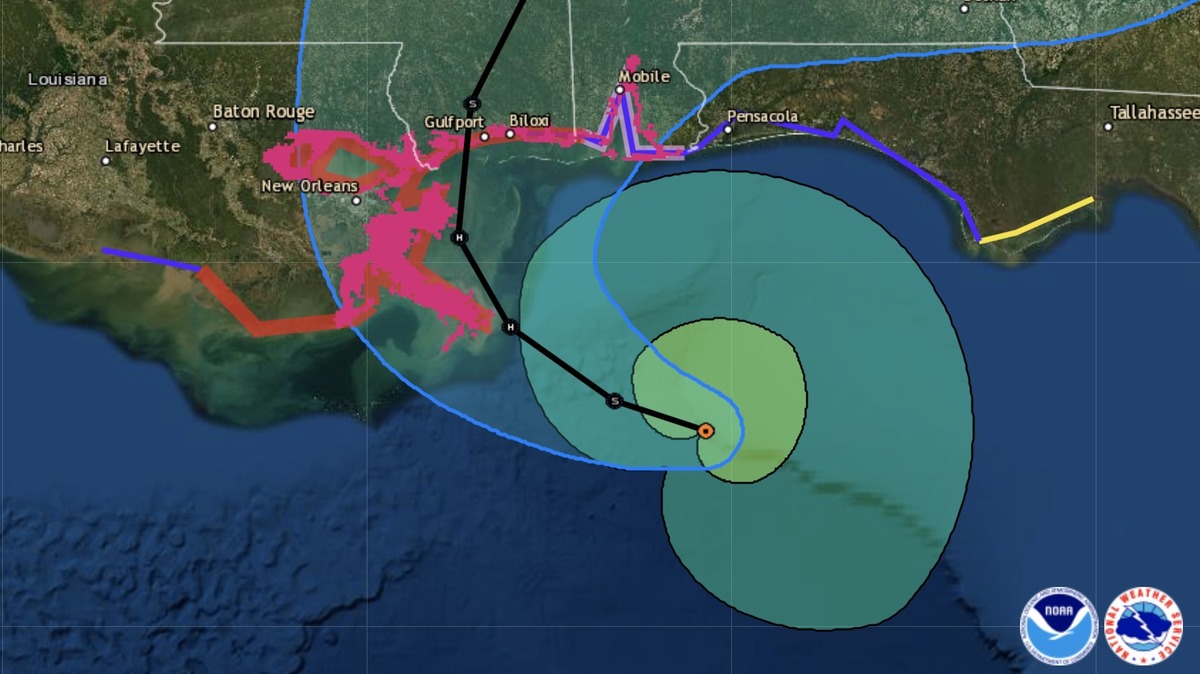 Tropical Storm Sally is currently forecast to make landfall on the Gulf Coast as a hurricane, possibly in the area near Gulfport, Miss.

Forecasters say conditions are too unstable to predict where the storm will arrive; current projections show Sally coming ashore between New Orleans, La., and Gulfport, Miss. The predicted track has shifted eastward in the past 24 hours, bringing a measure of relief to people in southwestern Louisiana, which is still recovering from Hurricane Laura’s arrival in late August.

🛰 With the sun coming out we can now get a visible image of #Sally. The latest explosion of storms close to the center has produced an impressive image of gravity waves emanating in all directions. This would suggest #Sally is trying to strengthen; we shall see what Recon finds. pic.twitter.com/koyZzDzf9k

As of Monday morning, Sally was about 115 miles east-southeast of the Mississippi River, moving west-northwest at 8 mph. Its maximum sustained winds were 65 mph, around 10 mph below hurricane strength.

The looming hurricane is just one of five tropical cyclones the agency is tracking – tying a record from September of 1971 for the most at one time, according to senior hurricane specialist Eric Blake of the NHC.

Sally is predicted to have maximum sustained winds of up to 85 mph when it arrives, but as with most tropical storms, the massive amount of water it brings will pose a perilous threat, in the form of flooding from its storm surge and heavy rainfall. Heightening that risk, the storm is expected to continue to move slowly, increasing the impact of its rainfall.

«Life-threatening flash flooding is possible and widespread minor to isolated major flooding on area rivers is likely along and just inland of the Central Gulf Coast,» the National Hurricane Center says.

Sally’s effects are already being felt in Florida, where it will likely continue to create flash floods across Florida’s peninsula, the hurricane center says. The storm is also adding to major flooding that is already happening across western and central Florida, the agency says.

Parts of Mississippi and Alabama will also see the risk of significant flash and urban flooding through the middle of the week, the NHC says.

«Life threatening surf and rip currents have begun along our beaches this morning,» the NWS office in Mobile, Ala., says. «Waves will continue to increase throughout the day and DOUBLE RED flags are flying at all of our beaches. Stay out of the water!»

🌊 Life threatening surf and rip currents have begun along our beaches this morning. Waves will continue to increase throughout the day and DOUBLE RED flags are flying at all of our beaches. Stay out of the water! https://t.co/Hjf7eyQiaX

«The window of time you have left to get ready is quickly closing,» Louisiana Gov. John Bel Edwards told residents Sunday night. Edwards declared a state of emergency over the weekend; he has also asked President Trump to declare a federal emergency.

«The storm is expected to impact New Orleans, where the state is currently housing more than 12,000 Hurricane Laura evacuees in hotels,» members station WWNO reports.