Butte County firefighters watch as flames tower over their truck at the Bear fire in Oroville, Calif., on Wednesday. In a record-breaking year for wildfires, hundreds of people in California have been evacuated by helicopter and tens of thousands have been plunged into darkness by power outages due to the extreme fire risk.

In California, a community of forest homes lies in ruins along Auberry Road in the Meadow Lakes area after the Creek Fire swept through on Tuesday near Shaver Lake. Gov. Gavin Newsom declared a state of emergency in five counties after record heatwave temperatures fueled numerous wildfires over the Labor Day weekend. 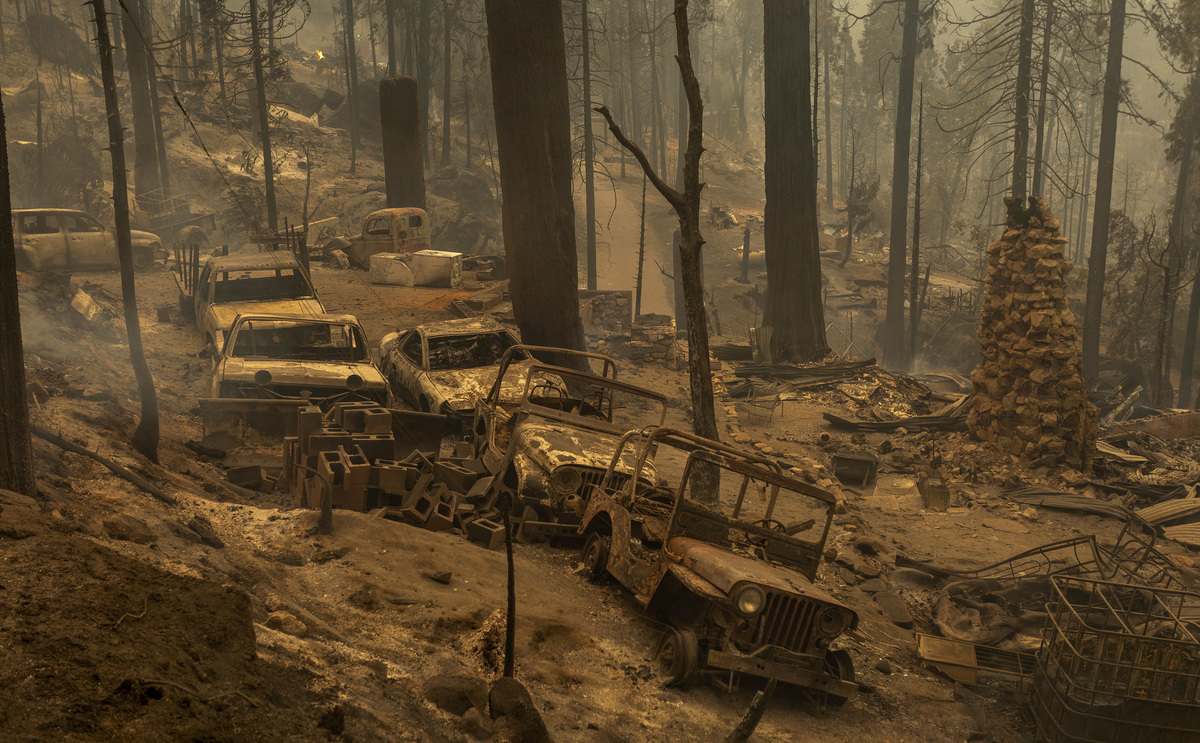 In California, a community of forest homes lies in ruins along Auberry Road in the Meadow Lakes area after the Creek Fire swept through on Tuesday near Shaver Lake. Gov. Gavin Newsom declared a state of emergency in five counties after record heatwave temperatures fueled numerous wildfires over the Labor Day weekend.

The 2020 fire season is off to a staggering start, far outpacing last year. By the end of the first week of September 2019, California had seen fewer than 5,000 fires, which burned nearly 118,000 acres. By the same point this year, the state recorded more than 7,600 fires and roughly 2.3 million acres burned, according to the California Department of Forestry and Fire Protection, or Cal Fire.

The fires have been stoked by a recent heat wave and propelled by strong winds. In many places, even a small blaze can find plentiful fuel — dry timber, grass and brush — officials say, pleading with people to avoid any activities that could create a spark or flame.

On Sept. 8, 2020, the #GOESWest 🛰️ focused in on the #OregonFires and #CaliforniaFires. We can not only see all the smoke they produce, but by combining Fire Temperature RGB with this GeoColor imagery, we can see the reddish glow of the hot spots where they originate. pic.twitter.com/RIBB5gOELf

A blast of cold air may reduce the risks in some inland areas, but along the coast, it’s adding to the problems.

«Strong winds on the western side of the winter storm have brought dangerous and life-threatening fire weather conditions to large portions of western U.S.,» the National Weather Service says, «from the desert Southwest, through the Great Basin, much of California into the Pacific Northwest.»

The dangerous winds could start to diminish across the coastal area by Thursday, the weather service says.

A critical or elevated fire weather threat persists in many of those places, with Red Flag Warnings along most of the Western coastline and nearby areas on Wednesday.

Pacific Gas & Electric has shut off power in parts of Northern and Central California, in hopes of reducing the chance that its power lines could trigger a wildfire.

Such extreme measures are a last resort, the utility says.

«PG&E set up 50 community resource centers for customers, especially those needing power for medical equipment,» Jamali says. «But the utility has shut down three of them so far because of the fires ravaging the state.»

The U.S. Forest Service has closed campgrounds in all national forests in California, citing the deadly risks of «extreme fire behavior» and firefighting resources that are already stretched thin.